Since tagging out on my second bird here in Missouri, I’ve been reflecting about my turkey hunting experiences over the past few days. Some of my most amazing memories in the outdoors come from my time being in the spring woods. My turkey hunting career began when I was 9 years old. This spring, at age 24, I eclipsed an amazing milestone, taking my 30th bird. My dad was involved in about the first 15 of them. He provided a foundation of knowledge for me to utilize as I became more adventurous going out on my own. I still remember vividly taking my first turkey by myself at age 16.

So much of what I have tried to do with Mahoney Outdoors revolves around sharing the experiences that hunting and fishing have to offer. I’ve tried to be as entertaining as possible in everything I post, but I also take pride in trying to be educational as well. So I’ve decided to start a new series on Mahoney Outdoors that focuses on turkey hunting success stories. My hope is to provide entertainment, but also educational value, by detailing out what led to an individual’s successful turkey hunt. My goal is to help all turkey hunters, new or experienced, learn more about different situations and strategies. In this series, I plan to share not only my own success stories, but also the success stories of many others!

If you, or someone you know, has an interesting success story, please feel free to reach out to me. I hope to share as many as possible each spring.

I will start with a success story of my own from opening morning here in Missouri. 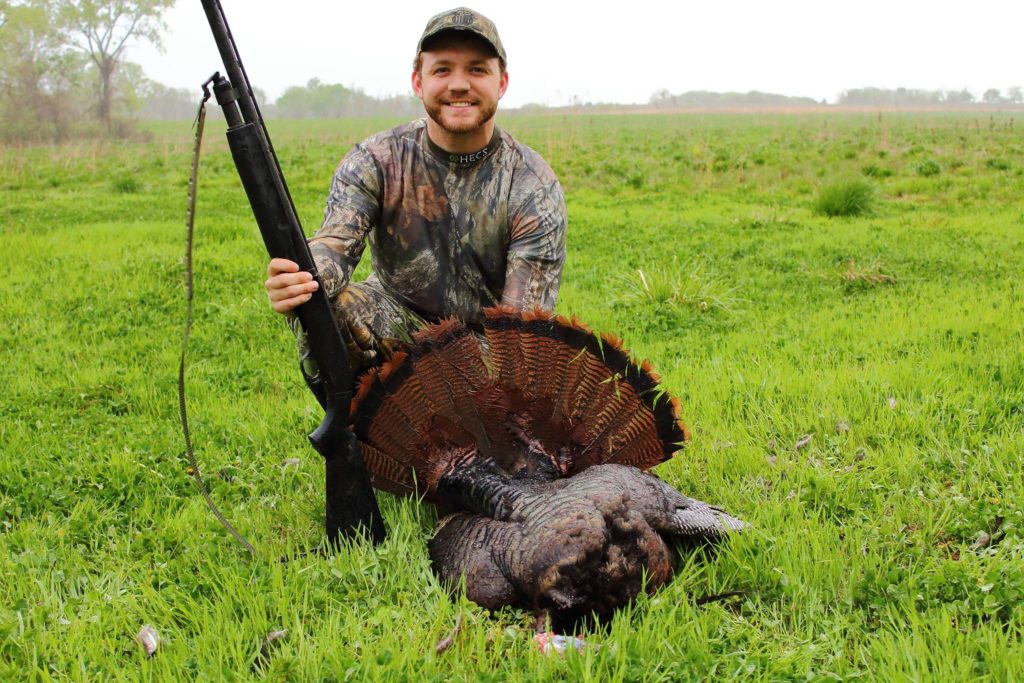 Having owned our property for 3 years, we had a good idea where the turkeys would be and what they would be doing around opening day. I set up a ground blind a few days before my hunt. In the weeks leading up to April 18th, we spent mornings listening to gobbling. The toms were still grouped up, a little more so than normal. But the good thing was they were right where they needed to be.

I practiced at 30 yards at a different property by our place. I use a Mossberg pump with 3.5 inch turkey loads.

We are big believers in low pressure hunting. With the exception of setting up the blind, I stayed out of the hunting area entirely during our observation period. I made sure to leave everything in my blind that I would need, like a chair and decoys, to eliminate any extra items to carry in on opening day.

Shooting time began around 6:30ish, so I was completely set up by about 6.

Our low pressure tactics paid off. The turkeys began sounding off as shooting time began. I estimated between 10-15 different gobblers within calling distance in all directions. Interestingly, I did not hear any hen yelps, but I heard several gobblers yelping nearby. A gobbler yelp usually sounds like a series of 2-3 deep, raspy yelps. The cadence is rather quick and off rhythm. I even heard only one yelp at a time.

I did some soft hen yelping while the birds were on the roost, combined with my best imitation of gobbler yelps on my slate call. The gobblers couldn’t stand it. I couldn’t believe it, but they were reacting better to the gobbler yelps. My dad had called in several birds in past years using primarily a gobble call and I was slowly becoming a believer seeing how well the turkeys were responding to a male turkey call.

Luckily, I had gobblers in front of me sounding off to my calls, which had two closer gobblers to my right, really fired up. At 6:45, the two to my right pitched down into the field at 150 yards. They instantly saw my decoy spread and began going in and out of strut and gobbling. The spread was 15 yards in front of me. It consisted of a jake standing behind a breeder hen, both facing away from me. I also had a feeding hen to the left, which faced away from the two gobblers.

The gobblers strutted around in place for a few minutes, which of course seemed like ages, until finally committing to me. I only did one string of hen yelps once they were in the field.

I pulled the trigger at 6:54 AM. You can watch the whole hunt unfold by watching the video below.