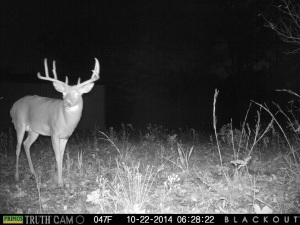 It’s Wednesday–hump day, and one day closer to madness in the woods! I rattled in a great 3.5 year old buck last weekend, bucks were hitting scrapes, and daylight movement was starting to increase. It truly is the best time of year, full of anticipation and excitement. In this week’s “Whitetail Weekly with Ryan Miloshewski” I give you a look into what I will do this week to up my chances of harvesting a mature buck.

-One of the first books I ever read was “Whitetail Strategies” by Peter Fidduccia. To this day, it is the best book I’ve ever read pertaining to deer hunting. One of the major points he makes when calling or rattling is to create the entire illusion. To sum it up, basically act like a buck. Envision what a buck is doing as he walks up to another buck before a fight, what he’s doing as he makes a long challenge grunt. It really makes a difference when you try to create the entire illussion instead of just banging some antlers together or blowing in a grunt tube. 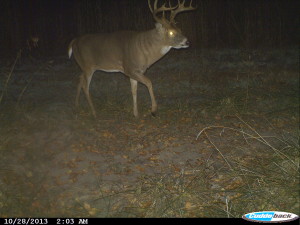 -Around this time of year, I start using deer scents–if only to pique curiosity. The general date most does in the north come into estrus is November 15, give or take 3 days. So, most does are not going to come into estrus this week. BUT, the bucks are waiting for the first ones to pop. Using a drag rag with some estrus urine as you walk into your stand can bring some bucks in. Make sure you don’t walk directly to the base of your tree with the drag. Walk 20 yards or so out in a shooting lane and hang in on a branch. The times I’ve had bucks come in, it’s happened fast, so be ready!

-Now is the time to start encroaching. By that, I mean start sitting in your “rut stands.” These stands are over pinch points or travel routes bucks use to move between doe beds, food, and cover. Right now, I tend to stay light with calling or avoid it altogether–unless I see a buck ready to respond. I like to just sit and observe and watch the routes the deer take. I don’t think the big, mature boys will be moving hardcore until next week. But, there will be some action in these areas.

-Now is my favorite time to utilize a decoy. Bucks are hopped up on testosterone and starting to look at other males with disdain. I like to put an immature buck decoy on the edge of a field. Visibility is key. You don’t want to put a decoy where an incoming buck won’t be able to see it. Make sure to place it in a way where a buck coming to it will present a good shot opportunity. As a general rule, most bucks will approach the decoy head on. Couple this with rattling and grunting and you have a deadly combo this week! 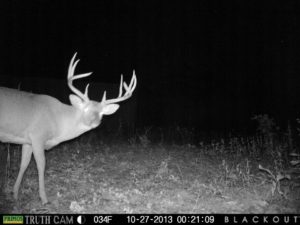 -Another major thing I do this week is a TTCA–Total Trail Camera Analysis. For example, if you see one buck on multiple trail cameras on different ends of your property, he’s probably looking for something. I always preach to take the temperature of the deer you’re hunting, and this is so important now. How do the bucks look on your pictures? Did you get a picture of a doe and then a few minutes later a buck? Use your cameras to see what’s going on with the herd. It’s such an advantage, and to not use the ability to tap into their behavior puts you at a disadvantage. Trail cameras have changed the game–embrace it!

-Why do some bucks have bigger antlers than others? To display their genetic worth, of course. A buck with bigger, taller, thicker antlers will be able to win most battles for a doe. His genes will be passed on because he is the fittest mate. It’s simple evolutionary biology.

-A deer’s nose is 500-1,000 times stronger than ours. Some researchers estimate a deer could smell you, at your stinkiest, from a half mile away. You can’t fool a deer’s sense of smell.

-In contrast, deer see only about 5x better than us. However, their field of view (peripheral vision) is somewhere between 250-270 degrees.

-The preorbital gland (near the tear duct of the deer’s eye) produces the scent bucks leave on licking branches over scrapes. The tarsal gland, which is urinated over, leaves a distinct marking in the ground. Scent communication is vital to a deer’s behavior!

-Turkeys are very territorial about food sources right now. Toms will strut, gobble and chase hens and poults off food at the drop of a hat. I heard a bunch of gobbling last week, as well as fighting purrs.

-The first frost will make some food sources, like brassicas, palatable for the first time. This is because the sugars in the plant start to break down and make the leaves sweet.

Quote of the Week: “If some animals are good at hunting and others are suitable for hunting, then the gods must clearly smile on hunting.”–Aristotle

To stay up to date each week, be sure to subscribe so you don’t miss any installments of “Whitetail Weekly with Ryan Miloshewski!” Also, be sure to follow us on social media for access to more great articles!