How was the rutting buck activity this year in your area? Did you witness much chasing? Did you see many deer for that matter? We heard mixed reviews across the state of Missouri and even from many of our next door neighbors. However, the rutting activity on our property was incredible. It lasted from late October all the way through December. Of course, there were peaks and valleys during that time frame.

Overall, I have never seen so much harassing and chasing on our place. I attribute it to several factors. Those factors include things that can be manipulated so you can actually create more rutting buck behavior in your area, just like we have.

We bought our property, which I call MahoneyHQ, in 2012. That season and the next saw serious deer declines due to EHD or “blue tongue” disease. We had very few mature bucks, and not many deer in general.

In order to help the population and create an environment bucks would like, there were several endeavors we undertook. Because we had a much smaller property than our previous one, we knew it would be harder to control what the deer, especially the bucks, would do. So our priorities focused on creating habitat that would make the deer, especially does (who don’t have as large of a home range), feel comfortable with coming to our property and staying there.

The first thing we did was decide not to shoot does for several years. Based on the shooting we heard nearby and word of mouth, we knew enough does were being taken from around us anyways. We hoped if we didn’t shoot does ourselves, more does would survive and rebuild the population. Another benefit of shooting less on our property meant we we created less pressure and disturbance on our deer herd. With the population stressed enough already due to disease, hunting pressure, and an abundance of predators, we didn’t want to put anymore unnecessary stress on them.

In addition to limiting doe harvest, we added food plots to the landscape. Clover is our favorite because it typically is a good attractant from September through November. It also lasts for several years before you have to think about seeding again. However, when freezing temperatures come consistently, the clover becomes a less attractive late season food source.

Next, we converted some of our tillable fields into warm season grasses. A large portion of the landscape around us is beans or corn, so we knew they wouldn’t be missing out much on food. Our roughly 40 acres of native grasses grew well the first year, but once burned, the growth and thickness was unprecedented. 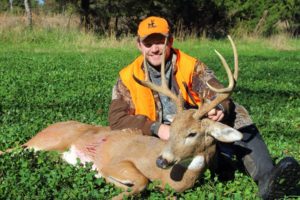 Fortunately, our timbered areas are thick with mature, acorn producing oaks. After cleaning up some undergrowth and strategic cutting, we enabled the growth and production of mature trees while also creating bedding in concentrated areas.

We topped off our efforts in the off season by eliminating predators. Last year alone we eliminated around 10 coyotes and a bobcat on 280 acres, which helps tremendously with eliminating stress on deer.

Essentially what we have done is create unbelievable safety areas where deer feel comfortable, secure, and undisturbed.

If we keep everything up, we are confident the deer population will continue to get better and the rutting activity more intense with each passing year. Based on neighboring deer reports, we are certain our priorities have been working and are taking us in the right direction.

Be sure to follow along with our progress by following us on social media! Links below.