In 20 years of fishing, I’ve learned many things about techniques and strategies to make my trips more successful. The exhilaration of landing a fish after matching your lure to the present conditions provides a satisfaction like no other. Even more important than the technical fishing skills I’ve acquired over time are the deeper lessons my experiences have revealed along the way.

Perhaps the most basic certainty I’ve observed when fishing is that no matter what, every outing provides the chance for a memory of a lifetime. A recent trip of mine solidified my belief even more.

After a stressful work week in mid-June, my mind could only focus on the first chance I’d have to throw a line in on Friday evening. To complicate matters, I found a way to upset my girlfriend that very same morning. We planned to spend time together all weekend, and although she likes to fish, fishing wasn’t originally what she had in mind.

Like many men before me, and many to follow, I forgot about our other plans in my haste to go fishing. Luckily, I still managed to convince her to join me instead and put off the other plans for another day.

Now at this point in the story, some of you are probably thinking, “Wow, I hope he realizes how amazing that girl must be to ditch the plans she wanted to go fishing with him instead.” That is a valid question. And your follow up thought might be, “I wonder if he’s writing that in an attempt to make it up to her, knowing full well she will be reading this.”

The answer to both questions is yes.

When she arrived at the farm, I made sure to have one of her favorite dinners ready, which certainly helped soften the mood. Soon, we were off to the boat to fish Mahoney Lake, with some slight tension still lingering. I kept my fingers crossed the fish would be biting and rigged up her pole with the best producing lure I had for the lake, a pink crappie jig, which also happened to be her favorite color.

Upon launching from the dock, a few casts was all it took for her to start catching numerous fish. Unfortunately for me, it was taking a little longer, and I’m sure there was a slight sense of satisfaction coming from the other end of the boat.

After catching yet another, she asked if anyone had caught one of our albino catfish yet, which we had recently stocked in the months prior. Nobody had.

“That would be so cool to catch one of those,” she said in a hopeful tone.

“Yeah, it would be,” I responded. “Probably not very likely though with the lures we’re using. We can try to focus on catfish with the right bait another time.”

We continued on, and as the sun sank down, the water turned to glass. The low hum of the trolling motor was accented with a resounding chorus of cricket frogs ringing out along the banks, only subsiding when we ventured too close.

The bites slowed down, but the distinctive “ker-plunk” of our fishing lures hitting the water continued to provide some much needed therapy from the stress of the week and our misunderstanding earlier that day. It became one of those moments where you feel completely content, like nothing can get any better than what’s happening at that very second.

But then it did.

“Woah!” I heard behind me, and immediately turned to see her winding furiously as her fishing pole bent over towards the water.

“I don’t know what it is, but I think it’s a lot bigger!” she exclaimed. The drag on the reel buzzed as the fish made a run. I moved over to help land it, fully expecting to see a larger bass or walleye on the end of the line.

Then, a distinct flash of white shot towards the surface into view and out of sight again within a split second. I frantically grabbed the net because I couldn’t risk this one getting away. I knew exactly what it was.

She fought it for a few more seconds and successfully turned it my way. I plunged the net into the water and one scoop was all it took. Just like that, she was the proud angler of the very first albino catfish caught out of Mahoney Lake.

After snapping a few pictures, we released it back in the water and returned to the dock as the starry night took hold. She told me how happy she was that she decided to come fishing with me. 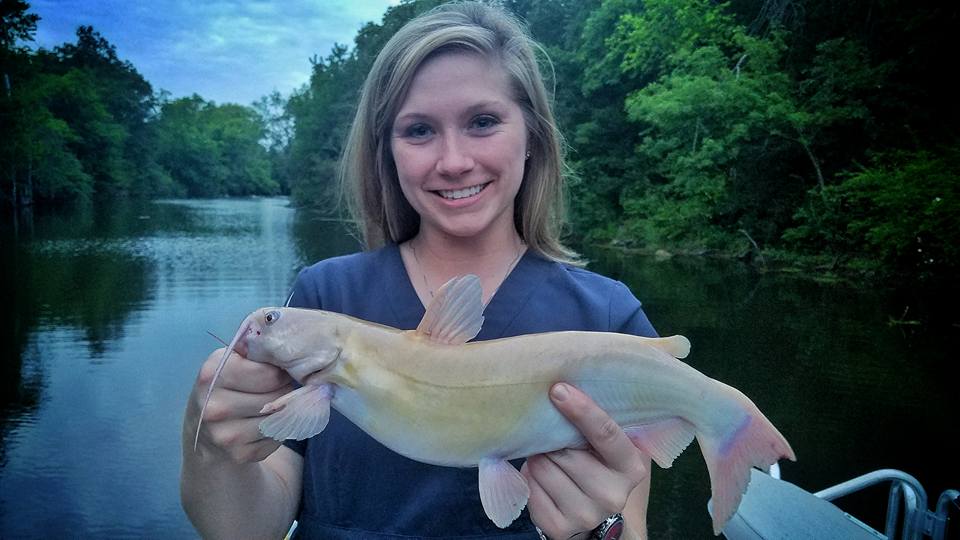 “And not just because I caught the albino catfish,” she joked with a playful grin. All I could do was smile.

On the ride home, I couldn’t help but think how the night’s events must have been meant to be. From the time we had our disagreement, to when she hoped for and caught the albino catfish, the night was destined to be something special – a true memory of a lifetime.