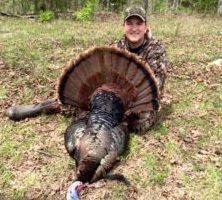 As the angry tom sprinted to five yards, I hid behind my decoy in disbelief. I watched as he went into full strut, close enough to touch. Only then did I realize why I was there. I tossed the decoy and let my Mossberg sing out. The most exciting turkey hunt I’ve ever been on was over.

I have seen a lot of talk on social media lately bashing what has been coined “turkey reaping.” The tactic is to hide behind a tom’s fan or a full strut decoy and crawl towards a gobbler to pique his dominance and get in close enough for a shot. Although it can be dangerous, it is 100% effective.

I have killed three toms this way and have had many other close encounters. By close, I mean 5-10 yards or closer. It is an exciting way to hunt and really can seal the deal on a hung up tom.

According to Facebook, as soon as you get behind a fan you will immediately get shot. It is inevitable. Hunting this way=death. I think the hate comes from, firstly and most importantly, lack of trying the tactic.

HOWEVER, I truly think this is an “old man yells at cloud” type situation. People are mad because it’s not “traditional.” Turkey hunters are just upset somebody came up with a new tactic different than sitting in a blind and yelping three times every 20 minutes. I 100% think this is the true origin of the opposition. In reality, it is about as exciting as turkey hunting gets. It exploits the dominance of a tom, and every single time I’ve done it, it has worked. 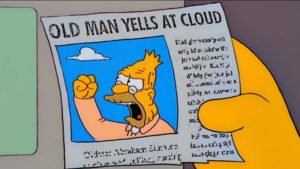 While I wholeheartedly agree this CAN be a dangerous tactic, I seriously do not get the hate and negativity toward it. Couple of points I always stick to when doing this tactic:

This is NOT the tactic. The tactic is to spot the turkey, on private land, with no other hunters around besides your party, and seal the deal. Like anything else in life or hunting, assess the situation and determine if it is a safe, viable plan. I do not do it every hunt, nor is it my go-to way of hunting. But if the situation calls for it, try it. It will work.

The counter argument will be “how do you know no other hunters are around?” And, I get that. I’ll admit there is never a 100% chance no other hunters are around. But, there are times where it’s probably 99.999999%. If you’re on 2,000 acres of private land, in the middle of the property, I would argue, IF TURKEYS ARE ACTIVE, GOBBLING AND NOT SPOOKED, no one else is around.

On a recent hunt, I had a tom gobbling down a hill 40-50 yds away from me for 45 min. He was just strutting and gobbling. I could hear him spitting, drumming, and his wings dragging in the leaves. He was absolutely in range. So, I decided to make things happen. I grabbed my now defunct Jake Mobile decoy and crawled toward him. As soon as he saw the decoy, he came running at me. He got to 15 feet. He spooked because I let him get too close, but it shows how effective it is.

The simple solution is to practice what you should be doing every single time prior to pulling the trigger: completely and undeniably identify the target you are shooting at. Regardless of adrenaline or excitement, you should notice if it’s simply a fan (like in the video) or a real tom.

There you have my two cents on turkey reaping. Happy, safe hunting!