Earlier this week on Monday night, I was able to get out on Lake Jacomo in Lee’s Summit for a few hours. I recently bought my first boat, a renovated 1961 crestliner with an ’85 Evinrude 25 HP motor. It might be old, but it’s perfect for Jacomo, a lake I had never fished before until having the boat. What a shame too, because it turns out I’ve been missing some great fishing only 15 minutes from my house!

I don’t claim to be an expert fisherman by any means. I’m still learning how to fish bigger bodies of water after growing up on farm ponds and strip pits my whole life. It sure helps having a boat! Even with limited experience, I have found tremendous success on Jacomo very quickly. 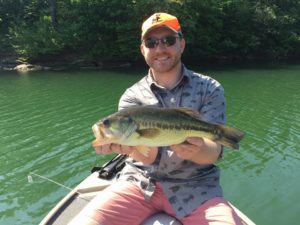 Late in the evening, I decided to check one last spot I had found some better sized bass on an early morning a few weeks prior. I had a hunch they might be moving back shallower into this cove now that the sun was sinking and the air temperature was dropping. When I found this spot the first time, the water was real clear and you could see to the bottom almost 8-10 feet down. Fish beds were everywhere and you could see a lot of small rock lining the bottom of the long flat on the inside of the cove.

My favorite bait recently has been the Ned Rig, mostly because of how easy it is to present and how effective it is at catching multiple species and sizes of fish. I had been using a 7 foot rod, but found the Lew’s Mach II Speed Stick 6’9 combo rod and reel and I like it even more. 8 pound fluorocarbon is my line of choice with the drag set just high enough to get a good hookset without breaking the line on a big fish. 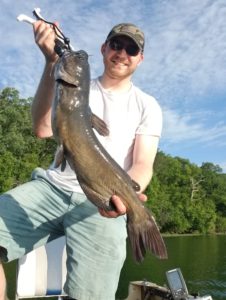 Just under an 8 pound channel caught on the Ned Rig near a shallow, rocky drop off on June 4th.

Tap tap tap and boom! My first small bass was in the boat within the first couple of minutes of being there as the light dwindled away. I worked my way into the cove and repeated that success several times. Finally, it was time to go and I made one last cast as I turned the boat around and headed towards the cove entrance.

Thump! I set the hook and my line took off. I felt several head shakes and began thinking I might have a nice walleye. When I pulled it into view from the deep, my heart began to race even more as a giant largemouth put up his last bit of fight. 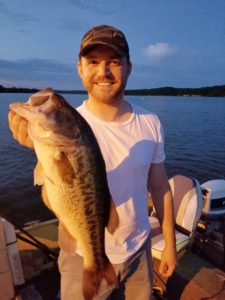 A 6 pound giant caught on a Ned Rig at Lake Jacomo.

When the night was over, I had landed 5 species on the Ned Rig – largemouth, channel cat (5 pounds and 8 pounds), bluegill, green sunfish, and white bass. The 6 pound largemouth was easily my personal best out of the lake. Most people don’t consider a Ned Rig a great bait of choice for big fish, but I disagree. Yes, it will catch a lot of smaller fish, but if you can find the right areas and be patient enough to work it slowly along the bottom, you have a chance to catch some real giants.

Be sure to check out the Lee’s Summit Area Fishing Facebook Group for daily updates on Lake Jacomo and more Jackson County lakes!