This past weekend, my good friend, Payden Hays, and I trekked down to Branson for a weekend of trout fishing on Lake Taneycomo. I was excited because the fishing had been good lately according to reports. I was also very interested to see how my new boat, an old 1961 Crestliner with a 25 HP engine and 37 pound thrust trolling motor, would do in the running water.

As always, Taneycomo didn’t disappoint. We arrived late Friday evening and decided to try some night fishing near the Landing. We picked up about 10 trout tucked around the docks before calling it quits around 1am.

In the morning, we launched the boat from the Cooper Creek public access boat ramp and headed down lake towards Monkey Island. There was fog to start, but the bright sun and clear sky took care of that quickly.

The lake was unusually low and no water was running. You could see all the way to the bottom in up to 10 feet. We threw 1/16th oz jigs on 2 pound fluorocarbon line to start, but nothing wanted to bite.

We theorized that it was so clear and calm, that the trout were having too much time to look at the jig and realize something wasn’t quite right. Yes, they are that smart! Even though conventional wisdom says to throw lighter jigs with slow or no current, we decided to switch to 1/8 oz jigs in deeper water thinking the faster moving bait in water with less visibility might cause more strikes. Basically, we thought with less time to analyze the bait, the more quickly they would make a decision to hit. Well, we might be good or we might just be lucky, but either way, the trout started hitting like crazy. 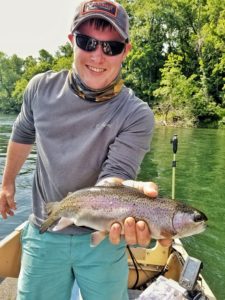 We caught countless rainbows using the Sculpin/Ginger and Sculpin/Peach Marabou jig patterns that can be bought at Lilley’s Landing Resort and Marina. We found them along the steep bluff above Monkey Island where it starts to turn up lake. The water is about 16-19 feet deep there. We simply let the jig fall for a 5 or 6 count and just twitched it back on the retrieve.

When they started running water from Table Rock Dam, we changed our tactics and tried something new that we’d been hearing about from local guide, Duane Doty, of Ozarks Trout Runners. Bomber Fat Free Fingerling Shad crank baits are very effective dragging along the bottom when the current is up high enough for you to get to the cable below the dam. The key is to wind down quickly so that the bait gets to the bottom makes continuous contact with it.

A word of warning. You will lose baits. It is virtually impossible to get them unsnagged in the heavy current. Be sure to come with multiple crank baits ready to go. You will also get moss quite a bit, but you’ll be able to feel when that happens because your crank bait will stop hitting the bottom and you’ll stop feeling the consistent vibration it makes when it’s free of debris.

We were using 6 pound fluorocarbon line with the drag set pretty loose.

Moments was all it took for us to get our fish fish on the crank bait. Then one after the other as we floated all the way down past Trophy Run and then back up to the dam again. Finally, I hooked into what we were after, a nice brown trout right at the bottom of Trophy Run! 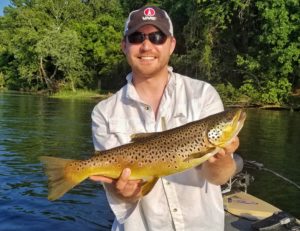 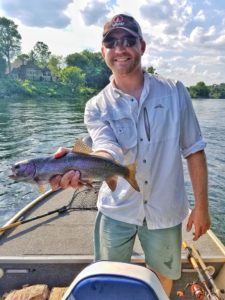 A nice rainbow caught by Fall Creek dragging a crank bait behind the boat in the heavy current.

When you first start pulling the crank bait behind the boat as you float along with the current, you might think you’re getting a bite all the time as the lure bounces off the bottom. However, when you have a true bite, it will be noticeably different. You’ll feel multiple tugs on the line and that’s when you set the hook!

Overall, it was another great weekend of fishing with close to 100 fish landed in the boat. Although we had some minor issues running out of gas Sunday afternoon, it was still a blast. We ended up getting an extra hour and a half of fishing in due to my stupid mistake not checking the tank. Not the worst problem to have!